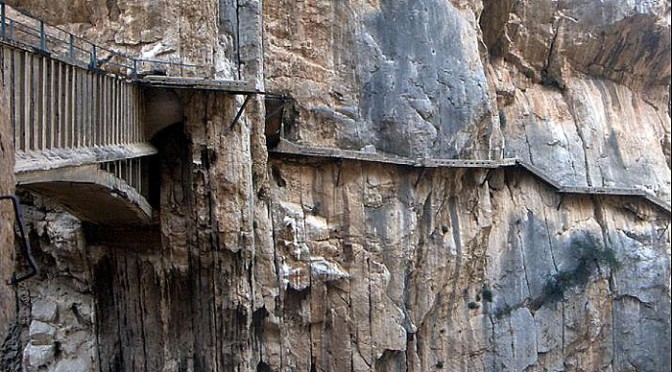 A bit of history about the Caminito del Rey

“El Caminito del Rey”, in English, “The King’s little pathway”, was initially built as an access route. It enabled workers at the hydroelectric power plants of El Chorro Gorge and Gaitanes Gorge with an easier way to transport materials, maintain and inspect the workings of the two power plants. Construction of the “walkway” began in 1901 and was finished in 1905 and in 1921 King Alfonso XIII visited and walked along the path for the inauguration of the Conde del Guadalhorce dam and since that time it became known as the “Kings path”

The original walkway was just 1 metre (3.3 ft) wide and in places more than 100 metres (330 ft) above the river below. From one end to the other is about 3KM. The path was constructed with concrete resting

on steel rails supported by stanchions at around 45 degrees driven into the rock face and for many years was in a highly deteriorated state with numerous sections collapsed and large open air gaps bridged only by the narrow steel rails. Very few of the original handrails existed but a safety-wire placed by climbers ran the length of the path. The area is a mecca for climbers and the Caminito del Rey became known as one of the most impressive and dangerous mountain trails in the world (as the many videos on you tube certainly demonstrate.) But, after several people lost their lives on the walkway (in 1999 and 2000) both access points were demolished by local authorities and access prohibited.

In June 2011 the regional government of Andalusia and the local government of Málaga agreed to share the costs of a restoration project (including car parking and a museum) but even with a budget of €9 million euros,the project took approximately three years to start and only in March 2014 the restauration work began.

In its new upgraded and repaired state the Camino del Rey has wooden and concrete flooring, glass-bottomed viewing and safety rails along the whole length.

The official opening ceremony took place in February 2015 and the Caminito del Rey is currently one of the most visited destinations in Andalucía.