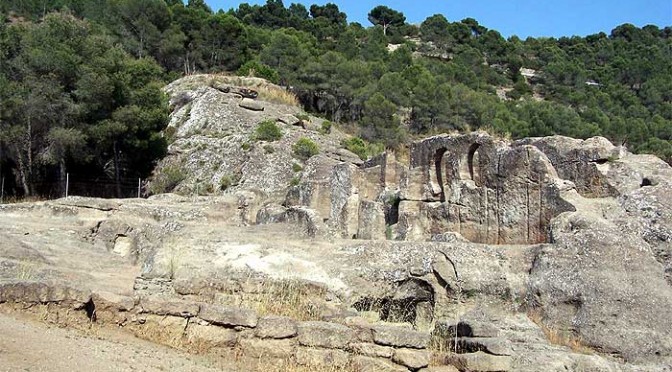 A few kilometres from El Chorro and the Caminito del Rey, you can visit Bobastro castle and Omar ben Hafsun. (Follow the MA-448 until the junction signposted for Bobastro and the Mesas de Villaverde.) lay the ruins of the impressive fortress known as “Bobastro” that are well worth a visit if only for its stunning setting. (You really need a car to visit this place though.)

This area around 850 to 917 was ruled by Umar ibn Hafsun ibn Ja’far ibn Salim (Arabic: عمر بن حَفْصُون بن جعفر بن سالم).  In Spanish this man was known as Omar Ben Hafsun and in the 9th-century he was a formidable Christian leader of the anti-Ummayad forces in southern Iberia.

The background of Umar ibn Hafsun is not clear. But the poet Ibn Abd Rabbih (860-940) did refer to him in his writings as a “Sawada“. These people were descendants of black Africans and over a century later another scholar (Ibn Hayyan) recorded a pedigree for Umar ibn Hafsan, tracing his descent to a great-grandfather, Ja’far ibn Salim, who had converted to Islam and settled in the Ronda area of what is now Málaga province in southern Spain.

The lineage then goes back several additional generations to one Count Marcellus (or perhaps Frugelo), son of Alfonso who may have been a Christian Visigoth. The geneology then was was copied by later historians, including Ibn Idhari, Ibn Khatib, and Ibn Khaldun, as well as in the publication called A’lam Malaga (History of Malaga) begun by Ibn ‘Askar and completed by Ibn Khamis, and more recent authors such as Dozy, in his Histoire des Mussulmans d’Espagne (History of the Muslims of Spain).

However, Wasserstein recently concluded that the pre-conversion portion of this pedigree was probably “invented by Umar himself”. Conde in 1820 indicated that Umar ibn Hafsun was “a man of pagan origin, of obscure and unknown ancestry.

Ibn Hafsun was born sometime around 850 in the mountains near Parauta, in what is now Málaga province.

Known from an early age as a wild youth with a very violent temper and he was apparently involved in a number of disputes including a murder around the year 879. At some point he joined a group of bandits and was captured by the then wali (governor) of Málaga, who imposed a fine (because he had not heard that Hafsun may have been guilty of the murder). The governor subsequently lost his post and Ibn Hafsun fled the jurisdiction to Morocco where it is said he worked briefly as a stonemason.

Presumably bored with his working life and seeking something more adventurous he returned to Andalucia, quickly became an outlaw, and joined the bandits who were in rebellion against the Cordoba caliphate.

His physical power and intelligence very soon helped him to rise to a leadership position and he made his base in the ruins of the old Bobastro (Arabic : بُبَشْتَر) castle.

Over the years he rebuilt the castle and also fortified the nearby town of Ardales. He rallied and bullied the disaffected muwallads and mozárabs to the cause, playing off resentment at the unfair, heavy taxation and humiliating treatment they were receiving at the hands of Abd ar-Rahman and his successors.

He acquired castles and lands in a wide area, not only in Málaga, but including portions of the provinces of Cádiz, Granada (known then as Elvira), Jaén, and Seville.

By 883 he had become the leader of the rebels in the provinces to the south and west of the Emirate of Cordoba. The year before, in 882, he is said to have fought the Emir in a battle in which the Christian ally García Íñiguez of Pamplona was killed.

In about 885, in order to be more centrally located and quicker to respond to external threats, ibn Hafsun moved his headquarters to the town of Poley, which is now known as Aguilar de la Frontera.

After he was defeated by the forces of Abdallah ibn Muhammad at the battle of Poley in 891, he moved his headquarters back to Bobastro and in 898 Lubb ibn Muhammad, of the Banu Qasi, was marching an army to support Umar when the death of his father at Zaragoza forced Lubb to abandon the campaign.

In 899, Ibn Hafsun renounced Islam and became a Christian and took the name Samuel. His motivation for this was probably opportunistic and it is assumed he was hoping to obtain military support from Alfonso III of Leon,

His conversion proved a major political mistake which although helping to attract significant Mozarab support, cost him the support of most of his Mullawad followers.

Although seriously weakened by his conversion to Christianity, Ibn Hafsun did remain a serious threat to the Caliphs of Córdoba and in 910 he offered allegiance to the Fatimid rulers of north Africa.

But, when Abd-ar-Rahman III became Emir of Cordoba in 912 he instigated a policy of annual Spring offensives using mercenary troops against Ibn Hafsun.

In 913 the mercenaries captured the city of Seville, and by the end of 914 had captured 70 of Ibn Hafsun’s castles.

In 916, he strangely joined forces with his enemies, the Umayyads in a campaign against northern Christian kingdoms, the reasons for this are not clear, maybe he saw the end coming and was trying to compromise or maybe just to save his own skin. For a while, even taxes and tributes were paid to the Umayyads (Something that Ibn Hafsun never did).

Ibn Hafsun died in 917 and was buried in the Iglesia Mozarabe (Mozarab Church) that he also had built at Bobastro. After his death, the fragile coalition then crumbled and even though his three sons Ja’far,’ Abd-ar-Rahman and Hafs tried to continue the resistance, they eventually fell to ‘Abd-ar-Rahman III’s armies. The last, Hafs, surrendered Bobastro in 928 and afterward is believed to have fought with the Umayyad army in Galicia.

With Bobastro’s fall, the mortal remains of Ibn Hafsun and his slain sons are said to have been exhumed by the emir and posthumously crucified outside the Great Mosque of Córdoba.

The archeological remains are open all week as follows and though the guided tour is in Spanish the signs and information boards are also in English.

From El Chorro follow the MA-448 until the junction signposted for Bobastro and the Mesas de Villaverde.

Trains to Ronda – Ronda Train Timetables
Are you looking for flights to Spain?
Carriage Museum in Ronda.
The VoiceMap GPS Audio Guide for Ronda
Guided Tours around Ronda
Carrying ID when visiting or living in Spain
Wine tasting tours and visiting a winery in Ronda.
Cycling from Ronda and around the Serrania
Buy The Ronda Printable Guide and City Map
Iglesia de Santa María de la Encarnación la Mayor Ronda